Aggregation is one of the most important concepts of MongoDB. It is complicated as well. I will try to explain to you a few basics using examples.

Aggregations are operations in MongoDB which can be performed on collections where documents (aka objects/records) are passed through a series of stages to achieve the desired results.

Simply said, its a series of operations in order to query the data.

Generally, the aggregation pipeline contains a complicated computation or pulling the data from multiple collections. You’ll get more clear as we study the operations which can be done in each stage of the pipeline.

You can use db.collection.aggregate() function in mongo shell in order to perform the aggregate operations.

It takes an array of objects as an argument, where each element of the array represents 1 stage of the pipeline. There are various set of operators which can be used at each stage depending upon your requirement.

Pro Tip: The sequence of operations will determine the efficiency of the overall MongoDB aggregation pipeline.

$match as a stage in aggregate

In simple words, it just filters the input documents based on a query.

So here goes the query and result 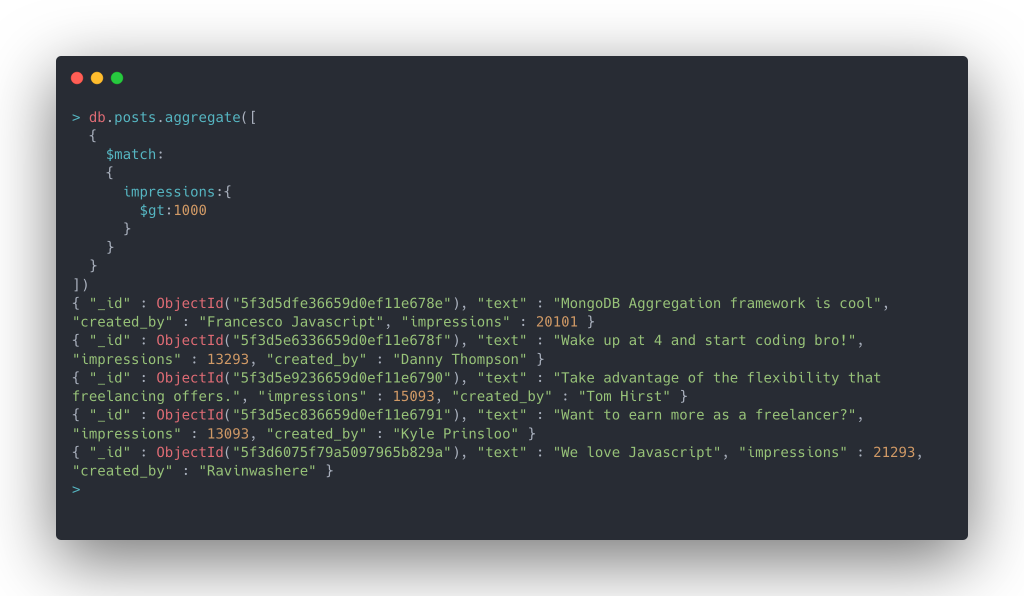 You can see that my post has been left out, cause my post had less than 1000 impressions 🙁

All the MongoDB queries which you use in db.collection.find() are compatible with $match stage.

$match can be used at any stage of the pipeline and can be used any number of times based on the requirement. The $match is one of the most used operators in aggregation pipelines.

As the name suggests, this operator is used to sort the input documents based on a field/property of the documents.

List all the posts which have more than 1000 impressions and sort by impressions in increasing order. 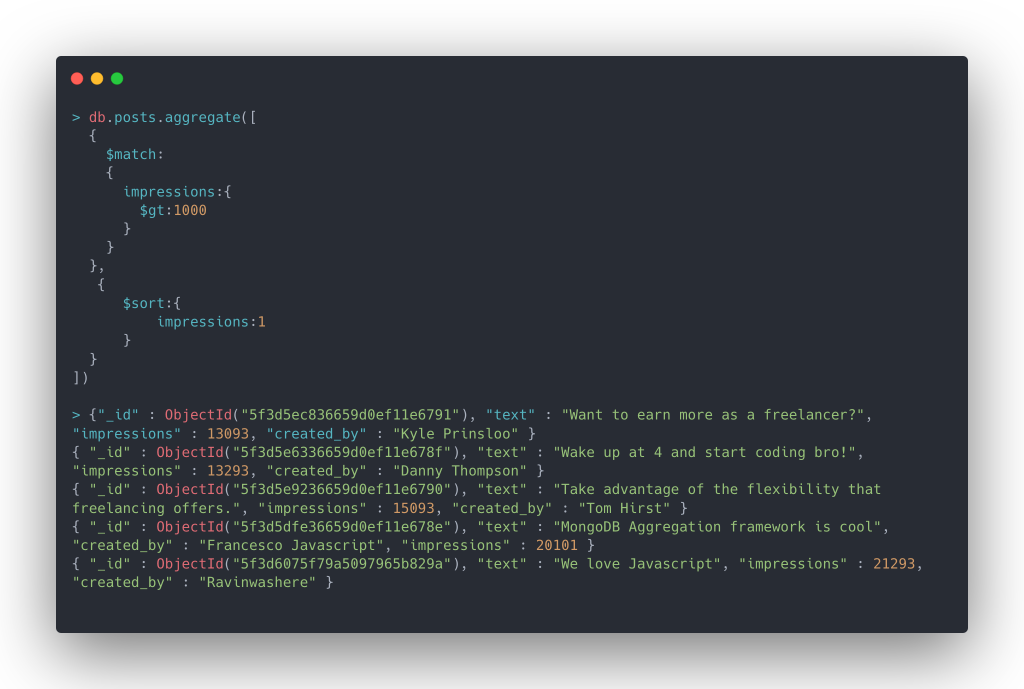 You see that in results, records are sorted according to no. of impressions in increasing order.

$skip stage in the aggregation pipeline

$skip skips the specified number of documents from the input and returns the rest of them. This is particularly helpful when you want to paginate the data at the frontend.

Its syntax is pretty simple to take a look 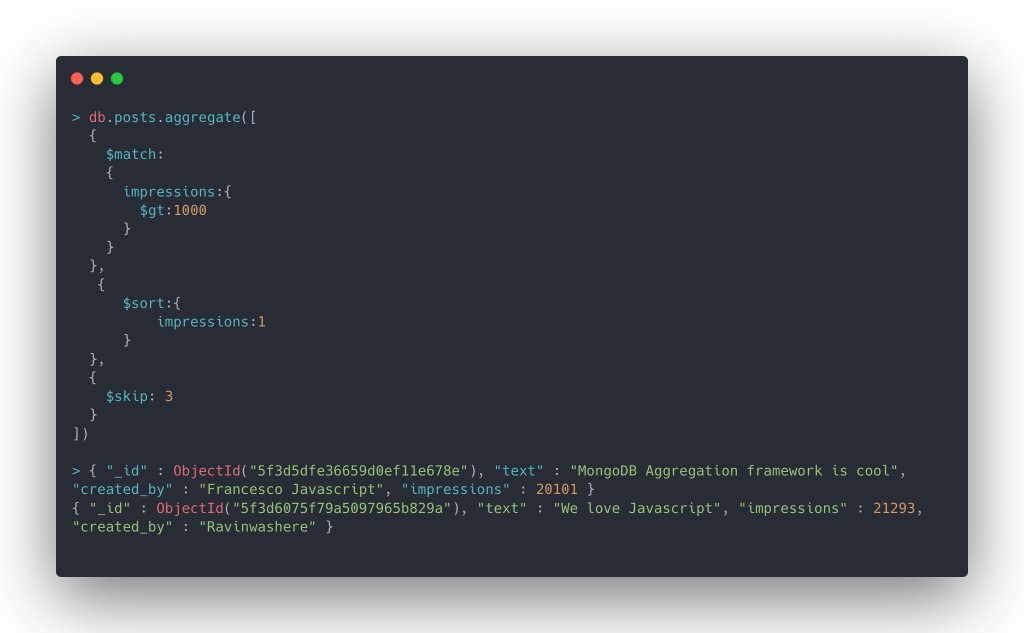 You notice, that earlier there were 5 documents, when you added {$skip:3} at the end of the pipeline, it skips the 3 and displays the remaining 2.

$count in the aggregate pipeline

It simply counts the number of documents passed as input. 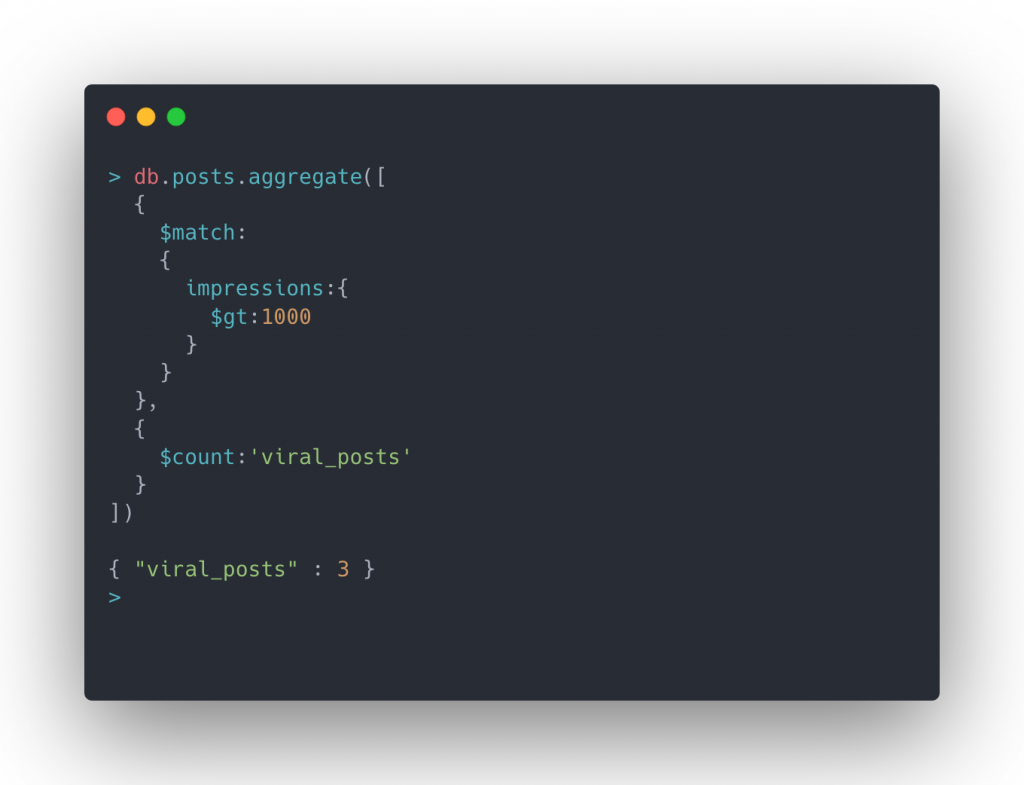 As an argument to $count, we pass the property name where the count will be stored.

In this post, I discussed the basics of the Aggregation pipeline in MongoDB and few basic stages like $match, $sort, $skip, $count. In upcoming posts I will take on more complex operations like $lookup, $unwind, and more.

I hope you were able to absorb the basics.